In the formative years I was fortunate to collaborate with my great friend Scott Gladden. Scott and I have similar interests, temperament and artistic sensibilities. Scott has an easy and natural bias toward creating that I've always admired. Every day we would sit and draw, listening to loud music, dutifully consuming the plentiful variety of substances on hand that were used as a call to inspiration. 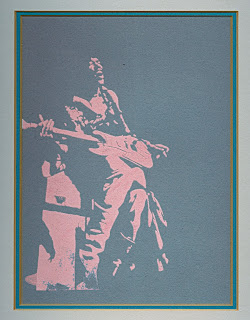 We learned silk screening from our high school art teacher Illona Rymer. She would divide school printing needs between us, Scott did some and I did others. But most our time, definitely our creative time, was spent in his room making art. 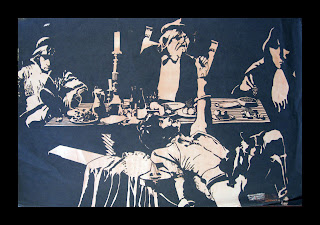 We made a lot of silk screens together. All of them were hand cut from our own drawings, often sitting knee to knee with a common drawing board across our laps, busily carving away at the lacquer film. His portion was often carved out upside down. I would typically do the precision parts, like instruments, and Scott would do the expressive parts like the hair and fabric. 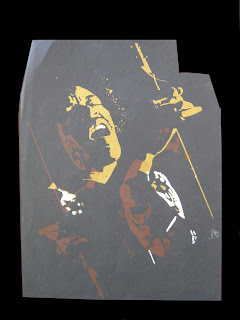 During the printing process he would experiment with different colors of paint on the same stencil, and coming back to hand detail parts of the screen with his finger. He has always been fearless in his approach to everything and gave me confidence to go way passed my perceived limits (in many aspects of life). 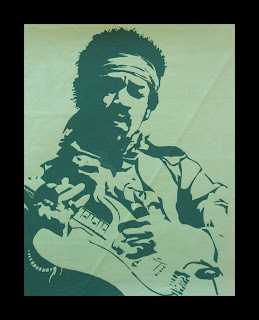 There are few survivors from this period of work from 1970 ~ 72; what I could find is represented here. The earliest dated one is Jimi (in front of the amp) from ’71, but they are all from the same basic time and each of us had a hand in each one. 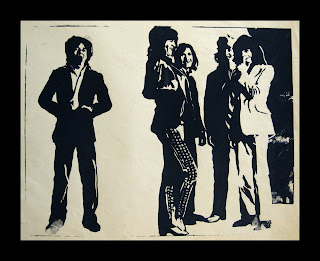 Below is a charcoal picture of Scott and me at the card table in ’72 or 3. Musicians Ken Rhoadsand Mike Rafnel, artist Bill Jacobi and producer Mark Ferree had rented a house at 1208 E. Commonwealth that became (among other things) a poker palace. I imagine Bruce Beckmantook the photo, but it could have been Joey Viles, both were on hand at Rhoads house regularly. The drawing was done in ’73 and I probably lost the hand. 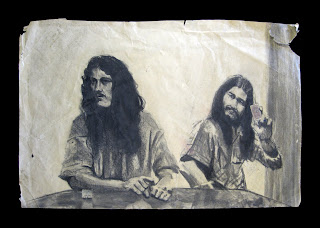 Posted by maestrejuan at 3:27 PM No comments:

Creating in the Pit

Back in the day, my room was called “the Pit”. Brant gave it the name and it was appropriate on many levels. He first used it as a general reference to returning to the Los Angeles basin or “pit”, but it perfectly described my personal environment and soon was used as reference to any space I occupied. Not many pictures have emerged from the pit but these show two of the typical activities that took place. The dominant activity of course was a place to congregate, listen to music and get fucked up. 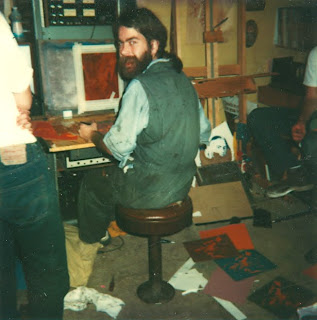 In this shot we see Tanya from behind, I’m printing a silk screen of Jimi (below) and Dale’s leg is in the far right. I’m sitting at a huge equipment rack, back before “audio racks” were made for consumer use. There was a drawer that pulled out that is being used as a table top for the screen. Above it is a multi-track recorder, an easel to the side and crap everywhere. 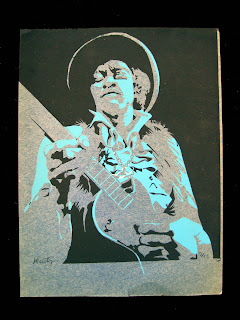 Let’s look at some of the other crap in the background. On the wall is a conte drawing of Jimi I did as a kind of demo for Richie. At the base of the easel is a poster I did for Rhoads’ concert at the high school. There is a cardboard cutout of a Stratocaster body that was used as a template in the painting in the next shot.

This next shot must’ve been taken about the same time. Here we find a different use for the pit; now it’s a recording studio. Paul Shaffer is playing on Richie Strickland's composition "I've Seen the Light" while the Teac 3340 documents the day. There are a couple overhead mics (one with a wind screen for no reason), one in front of Paul and Richie is plugged in. 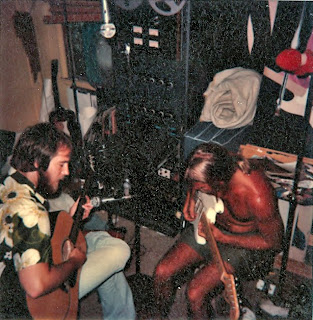 The wall were covered with crap too. Here are some of the images painted on the walls.

Pencil, ink, acrylic, oil, latex pastel and crayon. Whatta mess; but a lot of neat stuff came out of the pit in those days.
Posted by maestrejuan at 3:25 PM No comments: